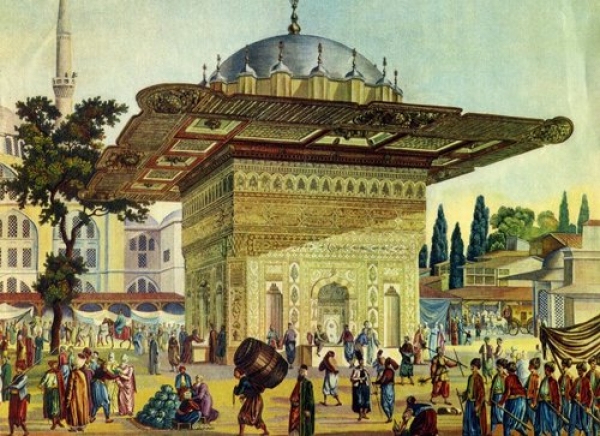 The Tophane Square Fountain is located in a triangular area between Necati Bey and Tophane Streets in the Tophane Neighborhood of Beyoğlu District of Istanbul and was built upon the orders of Sultan Mahmut I (1730-1754) in 1732. The fountain is a work of art by the architect Mehmet Ağa and its history was detailed by the poet Nahifi. It also forms an architectural unity with the Kılıç Ali Paşa Mosque.

The monumental size of the structure, which marks the transition from Classical to Baroque style architecture seen in its decoration, helped it to become one of the highlighted architectural elements in the area where it is located. Among the fountains of Istanbul built in a square shape, this fountain’s wide eaves and sharply arched niches reflect an aesthetic harmony between baroque and Classical Ottoman architecture.

The natural motifs of the Tophane Fountain consist of flowers clustered in vases showcasing a Naturmort style. The fountain was built during the transitional period and it shows examples of the most beautiful architectural techniques of this period’s style. This important work was restored by Sakasu, a Sabancı Group company, in 2006 and was put into service for the people of Istanbul. During restoration works, the rich ornaments of the fountain were enriched by a 23 karats gold leaf with an area of 40 square meters. The fountain was put into service during a magnificent opening ceremony with the participation of Kadir Topbaş, the mayor of Istanbul Metropolitan Municipality, and Güler Sabancı, the CEO of Sabancı Group.